LAKELAND, Fla. — The Polk County Sheriff’s Office is investigating a deadly single-vehicle crash that took the life of a Lakeland Motorcycle officer.

Paul Dunn, 50,  was on his way to work around 5:45 a.m. Thursday morning, riding his agency motorcycle, when he crashed into and drove over a raised median on Lakeland Highlands Road for unknown reasons, according to deputies. It happened just south of Lake Miriam Drive.

Officer Dunn lost control of the Harley Davidson Road King and came to a final rest in the inside left lane of northbound Lakeland Highlands, the sheriff’s office says. The officer was taken to Lakeland Regional Health where he was pronounced dead at 6:53 a.m., ABC Action News reported. 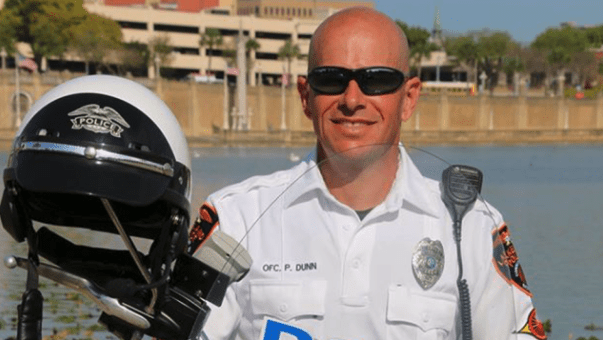 Motor Officer Paul Dunn was killed in a collision on the way to work Thursday morning. (Polk County Sheriff’s Office)

The Lakeland Police Department said on Facebook that Officer Dunn joined them in 2013 and was a a veteran of the United States Marine Corps. He leaves behind a wife and two sons who are currently serving in the military, according to LPD.

It is unknown if another vehicle was involved in the crash, PCSO spokesman Brian Bruchey said.

The Polk County Sheriff’s Office is conducting the investigation, reported The Ledger. They say its unknown at this time if another vehicle was involved. Sheriff Grady Judd and LPD Chief Ruben Garcia are expected to provide more information at a media briefing later Thursday morning.