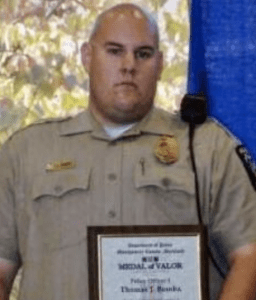 Montgomery County Police Chief Marcus Jones initially said the death of Officer Thomas Bomba, 38, was being investigated as a homicide. However, further investigation has changed that assessment.

According to officials, the Office of the Chief Medical Examiner of the District of Columbia ruled Officer Thomas J. Bomba’s death as a result of a self-inflicted injury, WBALTV reported.

The Montgomery County Police Department said the incident happened around 9 a.m. Monday in downtown Silver Spring after the officer had been investigating a “disorderly subject.” Nothing was heard from him after his call for assistance.

Dozens of officers responded to Bomba’s call for backup, where they found him injured on the garage’s top floor. He was taken to a hospital where he died.

Some roads in the area were closed to traffic and several students were kept inside Monday when it was believed Bomba’s killer was on the loose, Fox 5 reported.

A wife and two children survive Bomba. He had been with the police department for 13 years.