MILWAUKEE – Three months after the deadly shooting of Milwaukee Police Officer Matthew Rittner, his widow reveals she is expecting a baby girl.

“Bittersweet news, but we’re going to have another Rittner out here in the world that’s gonna come out and represent his daddy,” said Sgt. Roberto Colon.

The Milwaukee Police Sergeant tells CBS 58 that Caroline Rittner learned she was pregnant shortly after the death of her husband.

Sergeant Colon promised that Milwaukee Police will be there for the Rittner family who already has one son.

“She knows that she can come anytime and knock on our door. She doesn’t even have to. We’re gonna be there bothering her all the time anyway. She’ll probably have to kick us out of the house most of the time.”

Officer Rittner was shot and killed while serving a search warrant in February. The baby is due in October.

As a result, they released pink balloons from a box, signaling she’s having a girl.

“It was met with mixed emotions,” Lt. Kristin Felsman said. “Extremely joyful emotions because, (it’s) another legacy of Matt, and obviously very sad emotions because Matt would not be there to share in the joy of a new life.” 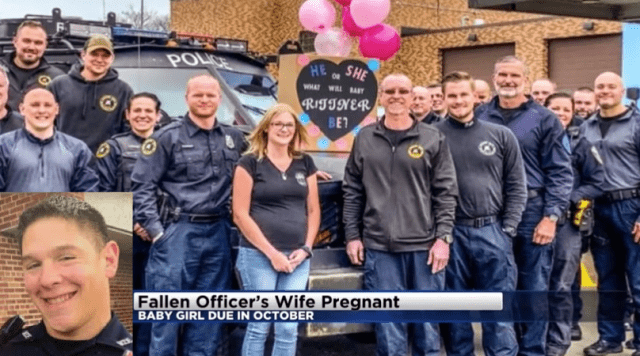 Caroline Rittner revealed she is expecting a baby girl with her husband’s unit. Matthew Rittner, lower left, was killed in the line of duty earlier this year. (Screenshot CBS 58/ODMP)

If you would like to help, Caroline is registered at:

Furthermore, the Milwaukee Police Association is also accepting donations at any TCF Bank branch to help the Rittner family.