Why retired California cops are fleeing the Golden State

Retired California cops are fleeing the Golden States in droves. I know, because I am one of them.

Upon retirement my wife and I sold our home, packed the U-haul, loaded the dogs and moved to Texas. Our daughter and her family had previously relocated, so that motivated us. But ongoing state politics made the decision easy.

Moreover, I personally know dozens of others who have done likewise. My retired law enforcement peers have primarily relocated to Texas, Idaho, Montana, and Arizona.

The biggest issues for leaving California continue to be degradation in the quality of life and over-burdensome taxes. Does this sound similar, New Yorkers? I’ve heard much the same from your end of the country.

The quality of life issues are experienced firsthand by police officers. Dealing with rampant drug use, unabated crime, and diseases spread through mass homelessness is sickening. Furthermore, local and state policies that reduce or eliminate consequences have created a system that profits criminal activity and promotes laziness by getting attached to the public trough. 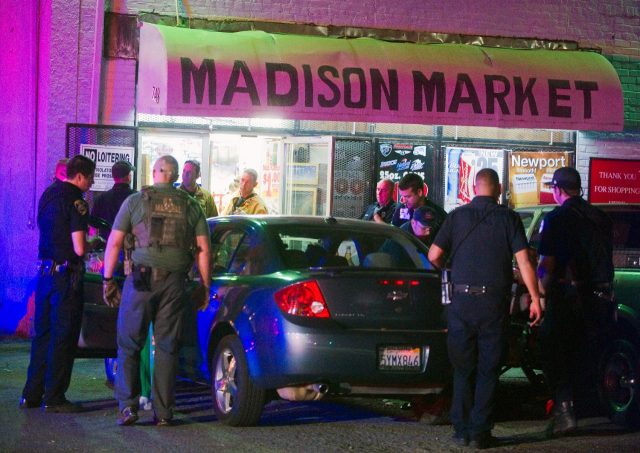 Police officers in California at a triple homicide. (File photo)

Sadly, we left behind two sons who’ve since married and are trying to make their way. As a result, we frequently visit California. While I miss lifelong friends and family, not to mention our appreciation of the year-round fabulous weather, I do not miss the “junk” created by failed policies and deceptive laws, which favor the criminal element.

I recently met a friend who is a retired California law enforcement officer for lunch at a trendy location near my home. She and her retired DEA husband recently moved from the Bay Area to Texas. “Did you find a place to park,” I asked, due to the crowded area in which we met.

“Are you kidding,” she replied. “The no cost parking structure was clean. I didn’t need to step over a homeless person or get accosted by an aggressive panhandler. And the elevator didn’t smell like piss and sh**. … Yeah, no problem; easiest public parking I’ve seen in years.”

Since moving to Texas I have heard hundreds of horror stories from California cops fighting against a state system that is unexplainably favorable to abhorrent behavior; to the degree that middle class California’s are fed up and seeking a better quality of life elsewhere.

Our first three years in Texas were spent in a rural part of Collin County—about an hour north of Dallas. “What do you like about it, Dad,” my youngest son asked during a phone conversation.

I held my cellphone up toward the sky and inquired, “Can you hear that?”

“Hear what?” he replied.

“Exactly, you don’t hear a siren do you?” I said. “I haven’t heard a siren in two years while living on this property. Moreover, I haven’t been aggressively approached by a vagrant, … and we don’t have graffiti.”

Admittedly, that is rural life anywhere in America. But serenity is something sought after spending a life in law enforcement.

Victor Davis Hanson is a senior fellow in military history at the Hoover Institution at Stanford University and a professor emeritus of classics at California State University, Fresno.  He wrote a piece that captures the problems in California. I’ve pulled some excerpts from his work to provide an expanded explanation of the climate out West:

Californians know that having tens of thousands of homeless in their major cities is untenable. In some places, municipal sidewalks have become open sewers of garbage, used needles, rodents and infectious diseases. Yet no one dares question progressive orthodoxy by enforcing drug and vagrancy laws, moving the homeless out of cities to suburban or rural facilities, or increasing the number of mental hospitals.

Taxpayers in California, whose basket of sales, gasoline and income taxes is the highest in the nation, quietly seethe while immobile on antiquated freeways that are crowded, dangerous and under nonstop makeshift repair.

Gas prices of $4 to $5 a gallon — the result of high taxes, hyper-regulation and green mandates — add insult to the injury of stalled commuters. Gas tax increases ostensibly intended to fund freeway expansion and repair continue to be diverted to the state’s failing high-speed rail project.

Residents shrug that the state’s public schools are among weakest in the nation, often ranking in the bottom quadrant in standardized test scores. Elites publicly oppose charter schools but often put their own kids in private academies.

Californians know that to venture into a typical municipal emergency room is to descend into a modern Dante’s Inferno. Medical facilities are overcrowded. They can be as unpleasant as they are bankrupting to the vanishing middle class that must face exorbitant charges to bring in an injured or sick child.

No one would dare to connect the crumbling infrastructure, poor schools and failing public health care with the non-enforcement of immigration laws, which has led to a massive influx of undocumented immigrants from the poorest regions of the world, who often arrive without fluency in English or a high-school education.

Stores are occasionally hit by swarming looters. Such Wild West criminals know how to keep their thefts under $950, ensuring that such “misdemeanors” do not warrant police attention. California’s permissive laws have decriminalized thefts and break-ins. The result is that San Francisco now has the highest property crime rate per capita in the nation.

Millions of fed-up middle-class taxpayers have fled the state. Their presence as a stabilizing influence is sorely missed. About one-third of the nation’s welfare recipients live in California. Millions of poor newcomers require enormously expensive state health, housing, education, legal and law-enforcement services.

California is now a one-party state. Democrats have supermajorities in both houses of the Legislature. Only seven of the state’s 53 congressional seats are held by Republicans. The result is that there is no credible check on a mostly coastal majority.

Huge global wealth in high-tech, finance, trade and academia poured into the coastal corridor, creating a new nobility with unprecedented riches. Unfortunately, the new aristocracy adopted mindsets antithetical to the general welfare of Californians living outside their coastal enclaves. The nobodies have struggled to buy high-priced gas, pay exorbitant power bills and deal with shoddy infrastructure — all of which resulted from the policies of the distant somebodies.

California’s three most powerful politicians — House Speaker Nancy Pelosi, Sen. Dianne Feinstein and Gov. Gavin Newsom — are all multimillionaires. Their lives, homes and privileges bear no resemblance to those of other Californians living with the consequences of their misguided policies and agendas.

The state’s elite took revolving-door entries and exits for granted. They assumed that California was so naturally rich, beautiful and well-endowed that there would always be thousands of newcomers who would queue up for the weather, the shore, the mountains and the hip culture.

Yet California is nearing the logical limits of progressive adventurism in policy and politics.

Insatiable state tax collectors and agencies are viewed by the public as if they were corrupt officials of Third World countries seeking bribes. Californians flip their switches unsure of whether the lights will go on. Many are careful about what they say, terrified of progressive thought police who seem more worried about critics than criminals.

Our resolute ancestors took a century to turn a wilderness into California. Our irresolute generation in just a decade or two has been turning California into a wilderness.

Will California do an about face? Not if the politically progressive elites like Gov. Newson, Speaker Pelosi and Sen. Kamala Harris continue to gain power and become enriched while the middle-class flee to safer environments. I have concern for those choosing to stick it out—like so many in my family. However, there is always room in Texas (along with Idaho, Montana, Arizona, or your preferred destination) for people seeking a better quality of life. … But it’s very hot in Texas in the summer, so bring your hat and sunscreen.