President meets K9 hero: ‘Conan is a tough cookie … I love this dog’

WASHINGTON – President Donald Trump met with the K9 hero of the famous raid leading to the death of Abu Bakr al-Baghdadi on Monday, surprising reporters at the White House.

“Conan is a tough cookie,” Trump said proudly, after meeting the dog. “Nobody’s going to mess with Conan.”

The dog was slightly injured in the raid that took place in October in Syria but has returned to duty.

The president, the first lady, and Vice President Mike Pence appeared in the Rose Garden with Conan to recognize her contribution to the successful raid, Breitbart reported. 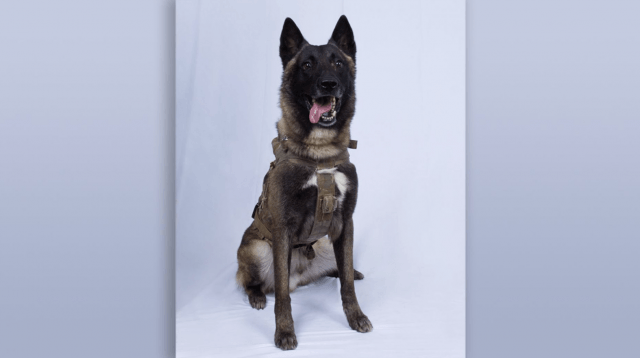 Trump praised the successful raid noting that there were no major injuries during the fight.

“We were able to complete the raid without any American casualty,” he said. “And so I think having the Special Forces here today, who obviously can’t come out in the public, but also having this extraordinary dog here today is all a reflection of our armed forces and the great job that they do.”

Moreover, the president remarked that even the toughest soldier would face tough chances against Conan, noting that he got to see how quickly the dog could move during the visit.

“It’s amazing, and yet you see how beautiful and how calm during a situation like this is. And you’re very lucky that he’s not in a bad mood today,” Trump joked with the reporters on hand to document the visit.

Conan is female, according to a White House source, and the Belgian Malinois serves in a military canine unit.

“I learned a lot about this particular type of dog. And it’s trained that, if you open your mouths, you will be attacked,” Trump added to reporters, whom he has an adversarial relationship with. “You want to be very, very careful.”

He acknowledged that the dog was probably the “world’s most famous dog” as he praised her performance in the raid.

The president said he gave Conan a medal and a plaque for her service.

“I actually think Conan knew exactly what was going on,” he said.

When asked if he would adopt the dog, Trump said that the canine still had a lot more time to serve in the field.

“I love this dog,” he said.  “Conan is not retiring yet. Conan is primetime, age-wise. Primetime.”