BURLINGTON, Vt. — The police chief in Vermont’s largest city has resigned, days after it was revealed publicly that he used an anonymous Twitter account to heckle a critic, the mayor of Burlington announced Monday.

Weinberger said he accepted the decision “with great sadness.”

“While I believe that Chief del Pozo has been truly an outstanding chief and while it was clear to me that despite his mistakes he continued to have considerable support within the city council, the police department, the police commission and the commission,” Weinberger said. “It was also clear that if he continued to serve the days ahead would be very challenging for him, his family, the department and the city.”

Last week, del Pozo said he used the anonymous Twitter account to respond to the critic for one hour on July 4 before deleting the account. He had initially lied to a Seven Days newspaper reporter when asked about it in July. Days later, he confessed to the mayor. Weinberger said Friday that he had placed him on administrative leave and directed him to turn in his badge, gun and city phone and to stop using social media. The chief then took six weeks of medical leave to seek mental health treatment. He returned to service in September.

The mayor has been criticized by some for not notifying the city council and public sooner. He said Monday that city officials had quickly learned that del Pozo had an underlying mental health condition and that they were trying to protect del Pozo’s medical privacy. Weinberger also apologized from the city to Charles Winkleman, who had been targeted by del Pozo, according to the report.

Del Pozo, who was appointed chief in 2015, was in a bicycle crash in 2018 in which he suffered three skull fractures, two brain bleeds and a concussion. 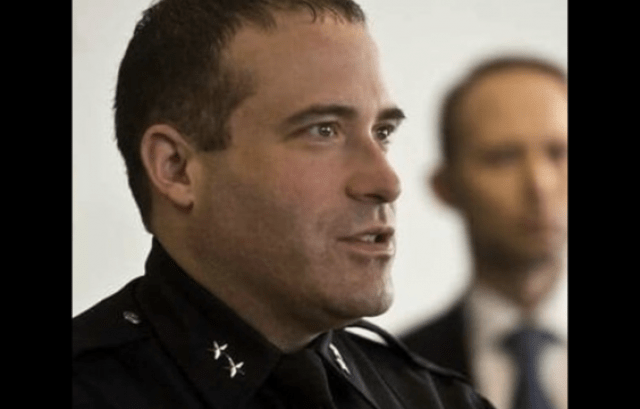 In his letter of resignation, del Pozo wrote that the city was able to fight the opioid crisis by reducing overdose deaths by half in 2018 and sustaining that into 2019; closed the gap in racial disparities in many ways; and lowered violent crime, Weinberer said, reading from the letter.

It was such an honor and a privilege to be our city's Chief of Police. I'm looking forward to future opportunities to serve, and happy and healthy times with my family. pic.twitter.com/ws6KqkgcCu

City Council President Kurt Wright said, “It’s a sad day for Burlington and for the chief, and all the way around.“ He said the city council still needs to learn more about how the mayor responded.