The path from sitcom actor to Beverly Hills cop

BEVERLY HILLS, Calif. – This is the unique journey of a young man from sitcom actor to an authentic Beverly Hills cop. His story is noteworthy; and it has nothing to do with Eddie Murphy.

There were at least 300 people in the room that day. Three hundred men and women who had gathered in the grand ballroom at the Beverly Hilton Hotel to vie for exactly two positions with the Beverly Hills Police Department, reported Behind the Badge.

Prior to this point, Eric Hyon’s only connection to law enforcement came in the form of an occasional parking ticket. As a result, he wondered, “What am I doing here?”

It wasn’t the first time he pondered the question.

Hyon is the son of Korean immigrants who owned a Mexican restaurant. He took a summer trip to South Korea during college that ended up lasting three years. While there, he completed his business management degree, became an international model and landed a regular part on the biggest sitcom in South Korea.

Finding himself in unusual situations that he didn’t quite expect or plan for is kind of his thing, according to Behind the Badge.

While in South Korea, Hyon fell in love and married. After the sitcom was cancelled, the couple decided to move back to Los Angeles, where Hyon would pursue a career as a financial planner. He got a respectable job and did pretty well. However, he hated the work.

The monotony, the hustling for clients, the suit, the tie. None of this fit the adventurous and intellectually curious Hyon.

“My mom saw that I was miserable,” he said.

His parent’s restaurant, Jose Bernstein’s, was located near the theaters in Westwood that are often used for movie premiers. When the celebs come out, it’s customary for retired LAPD officers to man the streets and redirect traffic. One of those officers would come into Jose Bernstein’s on a regular basis.

“My mom befriended him, and one day, she told him, ‘My son is so unhappy.’ The guy told her, ‘Tell him to become a cop,’” Hyon said.

The officer advised a career in a smaller department, like Beverly Hills or Santa Monica, where pay and benefits were better than at LAPD. Hyon’s mom relayed all the information, but he initially shrugged it off.

“I happened to have a client meeting in Beverly Hills shortly after that conversation, and it was not a good meeting,” Hyon said, laughing at the recollection. “I was just done with this career. I’m driving on Santa Monica Blvd., and lo and behold, there’s City Hall. I remember what my mom told me, so I parked and walked in there. As it turned out, they were accepting applications.” 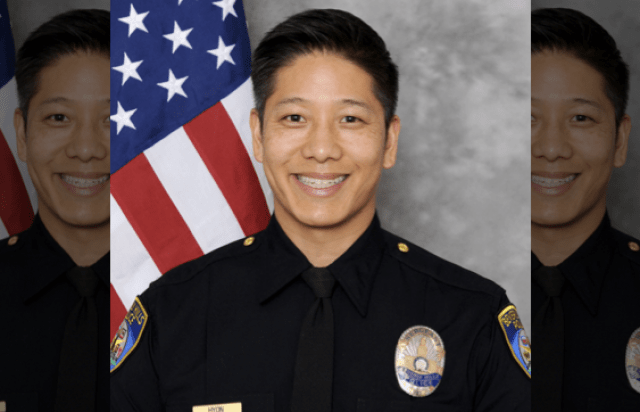 Recently, Sgt. Hyon won the department’s Allen H. Karlin Award for Exemplary Police Work. In nominating Hyon, Officer Jesse Perez wrote, “It is rare to come across such a dynamic and multi-purpose law enforcement officer, such as Sgt. Hyon.”

Hyon’s rare qualities, forged in unusual life experiences, were evident even before he joined the department. They are what made him stand out amid 300 applicants in that ballroom that day. He joined an elite number of applicants who were granted interviews. The date of the interview, Hyon was told, was non-negotiable.

“That was it. If you didn’t make the interview, you were out. As it turned out, that happened to be the date we were supposed to leave for Cancun on our delayed honeymoon,” he said.

His interview was at 8 a.m. His flight was at 11. It wasn’t even a year after 9/11, when airport security took even longer to get through than it does today. The former actor made adjustments.

“My best friend and my wife were waiting outside in the car, with the engine running,” he said. “When I walked in for the interview, they could tell that something was going on and asked, ‘What’s wrong?’ I told them. It was the perfect icebreaker.”

As a result, they made the flight, and Hyon made it to the next round in the hiring process.

“The last 17 years have gone in a blur. I’m just happy that I found something that I love to do,” he said. “I come in every day with the same amount of eagerness and enthusiasm and wanting to help someone in need as I did 17 years ago.”

Due to the uniqueness of Beverly Hills, Hyon has worked his share of unusual cases, including as lead homicide detective in Whitney Houston’s death investigation. He served on the Special Tactics Unit that helped coordinate protection during visits by dignitaries, including President Barak Obama.

Mostly, though Hyon has found police work to consist of helping average people in their darkest hour; something he believes to be a privilege.

“No one calls the police when they’re having a great day, so we see people at the lowest points of their lives,” he said. “Knowing that I have a chance, a moment, to help steer this person’s life in a better direction and to be that difference is something I don’t take lightly.”

His attitude toward policing inspires those around him. Perez wrote that he is consistently impressed by Hyon’s “work ethic, attention to detail, and unwavering commitment to doing things at his highest ability. He leads by example and challenges both his subordinates and peers to reach their highest potential.”

As fulfilled as Hyon is by law enforcement, he wasn’t excited when his teenager told him she’s considering a career as a police officer, according to the report.

“Society has changed in how they view our profession,” he said. “I don’t want her to go through that.”

Still, Hyon is happy he didn’t walk out of the ballroom that day: “Every day is different, and you’re seeing stuff that most people go their whole lives without seeing,” he said. “Even after 17 years, every day I can’t believe that they pay me to do what I do, catch bad guys and put them in jail.”