ODESSA, Texas – An Odessa, Texas police corporal was grateful to meet the woman who left a random thank-you note on his patrol car. In doing so, she expressed her appreciation for the Odessa Police Department’s bravery in responding to the West Texas shooting rampage on Aug. 31.

On Monday, Corporal Gary Potter wrote on Facebook that he was shocked to find a handwritten note and flowers on his patrol car.

“I do not know you and you do not know me, but I thank you for your sacrifice,” the letter read. “You put your life on the line every day to protect our community. I cannot express how grateful I am. Thank you so much.”

The note was signed “Bria Montes,” CBS 7 reported, an employee at Medical Center Hospital. She witnessed “firsthand” the devastation of the Saturday violence that left seven people dead and 19 others injured.

On Sept. 3, Potter and Montes got to meet, sharing a hug and emotional conversation outside the hospital. 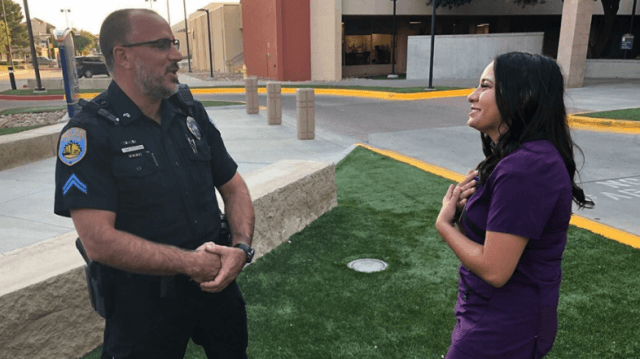 On Sept. 3, Odessa Police Corporal Gary Potter and Bria Montes got to meet for the first time, sharing a hug and emotional conversation outside the hospital. (Medical Center Health System)

As for Potter, the random act of kindness hit especially close to home. The peace officer later revealed that his wife and daughter had been shot at while driving down 42nd Street but escaped the hail of bullets uninjured.

“That one on my car that day just, man, I needed it,” Potter thanked Montes, according to CBS. 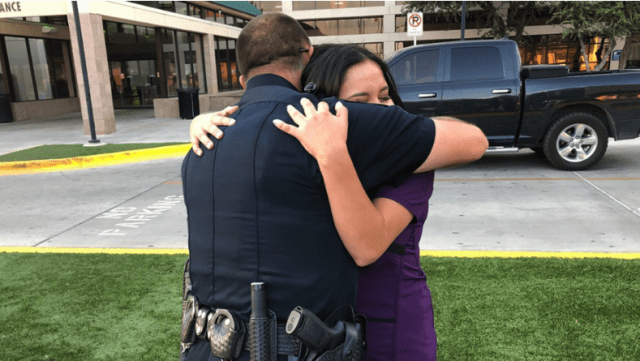 For Odessa (Texas) Police Corporal Gary Potter, Bria Montes’ random act of kindness hit especially close to home. Porter revealed that his wife and daughter had been shot at while driving down 42nd Street but escaped the firestorm unscathed. (Medical Center Health System)

Moving forward, the officer hopes that the story inspires others to thank law enforcement officials and first responders for doing their part.

“Just a thank you, a handshake, anything like that,” said Potter, a 24-year veteran of the department. “A handwritten note, it means the world. It’s more valuable than winning the lottery or something. It is very, very powerful.”

“Thank you Bria Montes for this small act of appreciation it means more to me than you can ever know,” he wrote on Facebook.

“It kills me that I was not here to protect my family that day but thank you to all my fellow law enforcement family that was,” Potter went on. “This is why I will suit up tonight and hit the streets of Odessa and I can assure you that if your child, mother, father, brother, sister, or family calls I will respond with everything I have to protect them from the evil that exists.”