LIVINGSTON PARISH, La. – Photos of two suspects, a married couple, posing nude with a child were among the items authorities seized when a longtime sheriff’s deputy and his wife, a junior high school teacher, were arrested this week in Louisiana on child rape and pornography charges, according to a report.

#BREAKING: Former Livingston Parish Sheriff’s deputy, Dennis Perkins, has been booked into the Livingston Parish Detention Center. He and his wife are accused of child rape and the production of child pornography, among other disturbing charges. @WAFB https://t.co/r9cTqpc8vc pic.twitter.com/DJD5lUtfmt

The husband was immediately terminated from his job as a lieutenant with the Livingston Parish Sheriff’s Office, while the wife resigned from her teaching job at a junior high school in Walker, La., the report said.

“It’s a sad day for us, for all law enforcement officers, when you arrest one of your own,” Livingston Parish Sheriff Jason Ard said in a statement. “ … but as I have said in the past, no one is above the law.”

Both husband and wife were charged with 60 counts of production of pornography involving a child under 13, as well as rape charges, authorities said.

Furthermore, Dennis Perkins was charged with obstruction of justice because he reportedly tossed his cellphone into a river after realizing investigators were about to arrest him while he was on a fishing trip, a source told FOX 8. 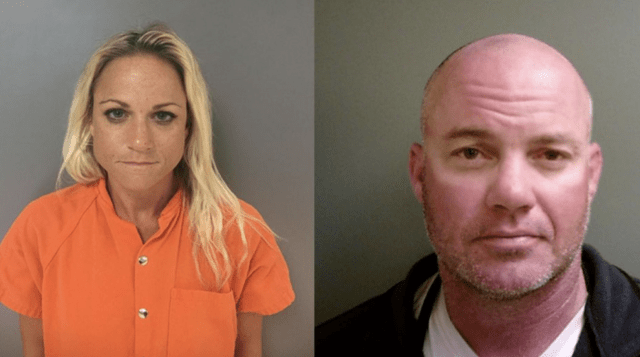 The investigation into the couple’s alleged crimes began with a tip from the National Center for Missing and Exploited Children, The Advocate of Baton Rouge reported.

The number of children who may have been victims of the couple wasn’t immediately known, authorities told the news agency.

Dennis Perkins was transferred to a detention center in Livingston Parish, with bond set at $1.6 million, and was later transferred to the Ascension Parish Jail. Cynthia Perkins was being held in lieu of a $500,000 bond, according to The Advocate.

“Protecting Louisiana children is one of my top priorities,” Landry said. “So my office and I will continue to do all we can to find and arrest child predators.”