KNOXVILLE, Tenn. One young “hot” Knoxville cop has become something of an overnight social media sensation after starring in a two-minute video explaining a new hands-free driving law on behalf of the Police Department.

The Hands Free Law took effect on July 1 in the state, banning drivers from holding their phones on the road, WTVF reported.

Reps for the Knoxville Police Department easily got the message across, with Officer Derrick White sending hearts racing across the Internet, the Knoxville News Sentinel reported.

In the quick clip shared to Twitter, since viewed over one million times, the aviator-sunglasses-wearing police officer urges motorists to respect the new law and “do your part to keep our roads safe,” standing side-by-side with fellow LEO identified as Officer Wilson, as they fully explain the new law. 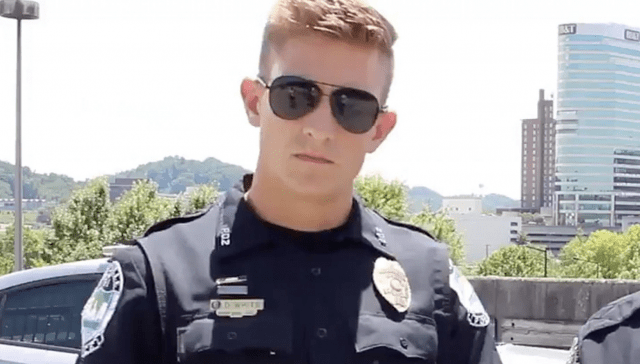 “Officer White I will throw my phone into a river if that’s what it takes for a date with you” @LydiasTheShidia cried in a tweet that has since been liked nearly 52,000 times.

“Is Officer White single? Asking for a friend,” @bbergeronn echoed of the “hot” cop.

“Where does the officer on the left patrol EXACTLY???” @HRLawKnox asked.

“What days and where does Officer White work?  I need him to personally explain this new law to me please,” @KK_and_company agreed.

One tweeter was willing to go to great lengths to meet the handsome, physically fit young officer.

“Can I get arrested by Officer White?” @TatyanaFields4 gushed.

“If the only way to meet Officer White is to text and drive then you already know what I’m doing,” @Nic_Barnes_ dared.

All advances aside, a rep for the Knoxville Police Department has since revealed that White has been with the department for eight years, working as a resource officer for the Richard Yoakley School and covering the motors unit when school is not in session, the News Sentinel reported.