YORK, Maine – The family of a fallen officer in Maine said they felt forced to remove a Thin Blue Line flag to mark the anniversary of his death after hearing people (falsely) complain that it was racist.

The fallen officer, Trooper Charles Black, was fatally shot during a bank robbery in 1964. His son, also named Charlie Black, decided to erect the Thin Blue Line flag, which is also known as the Blue Lives Matter flag and is meant to honor law enforcement. The son placed the flag on a utility pole near his home, prompting some residents to complain that an offensive symbol was on public property.

The town manager of York, Maine told News Center Maine that a resident visited his office to complain about the flag. 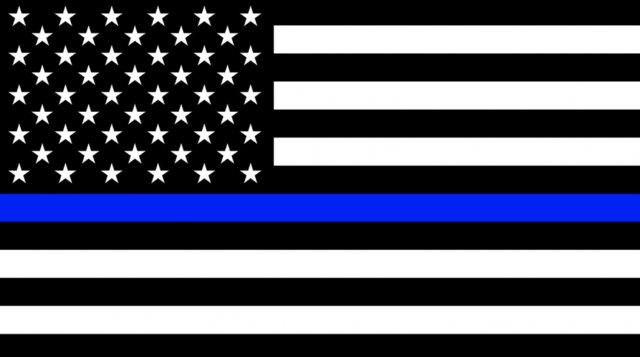 “A resident came in and said there’s a problem,” Town Manager Steve Burns said, adding that the resident argued, “This is a flag that represents segregation and discrimination.”

Rather than educating the misinformed citizen, he called the family of the fallen officer to forward the concern about the flag. Consequently, the trooper’s widow took the news hard.

“This is just ripping a wound in her heart,” Burn said.” It was pure instant emotion for her and her whole family.”

The son, Charlie Black, decided to take the flag down after his mother requested it, and expressed frustration that the effort to pay tribute to his father had gotten mired in a politically-charged debate.

“This is not a racist white supremacist symbol, and I’m angry it’s portrayed that way,” Charlie Black said. 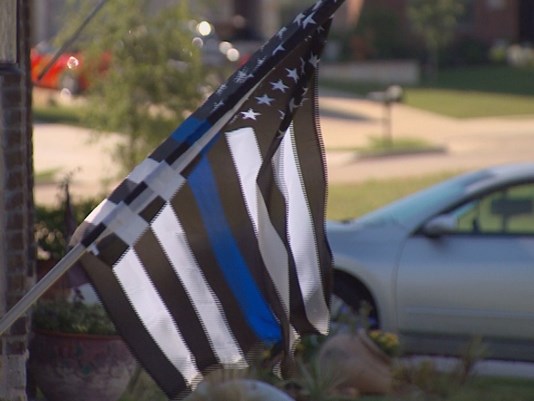 “God forbid we should offend anyone,” she said to the newspaper. “It bothers me tremendously. It’s the anniversary of his death. He gave his life to protect the public, and I gave my life to this town, and we can’t even celebrate this person. I’m sorry I offended them. It’s coming down and it won’t happen again.”

The flag is meant to honor law enforcement, particularly those lost in the line of duty.

“People who see other messages in the flag have merely bought propaganda and lies concerning law enforcement officers,” said retired police lieutenant and managing editor of Law Officer, Jim McNeff. “This flag represents male and female police officers as well as every ethnic race employed as a cop; and that’s quite a diverse group. So don’t tell me it represents racism. That is a falsehood perpetuated by people who have an axe to grind with cops. Moreover, honoring a fallen officer in this manner is sacred. A person complaining about the practice should be educated not appeased, and the flag ought to remain waving in the wind.”

“Whether it’s the American flag or the Thin Blue Line flag,” McNeff concluded, “losing our respect and national pride in symbols that represent patriotism along with law and order will spell doom for us as a people. I shutter to think what that kind of disrespectful majority would do with our nation.”

York Police Chief Charles Szeniawski said the town does not have a policy about placing flags in places other than private residences.

“There is no policy about flags. Can anyone put anything up there? I don’t know. Maybe it’s something we should look at.”

“It’s how people interpret it,” he said. “For most officers that’s the Thin Blue Line flag. Just because you’re an officer doesn’t allow you to do anything you want. You can’t cross that line. That’s what it means to most of us.”

Jim McNeff
Jim McNeff, police commander (ret.), noted law enforcement author, founder of Badge145.com, and managing editor of LawOfficer.com. ... Before writing Jim served in law enforcement for thirty-one years. He retired as a police lieutenant after twenty-eight years with the Fountain Valley Police Department in Orange County, California. Prior to that he served the 3902 Security Police Squadron in the United States Air Force, assigned to the 1st Air Command and Control Squadron at Offutt Air Force Base, Nebraska. ... Jim holds a Bachelor of Science in criminal justice from Southwest University and graduated from the Sherman Block Supervisory Leadership Institute as well as the International Association of Chiefs of Police (IACP) course, Leadership in Police Organizations. He’s authored three books: "The Spirit behind Badge 145," "Justice Revealed," and "Jurisdiction." ... Jim has been married to his wife Jamie since 1983. They have three adult children and three grandchildren.
Recommended Posts
Showing 8 comments