“The one thing he couldn’t stop talking about was Joaquin starting football this year,” Police Officer Javier Lara said Sunday.

Sadly, Espericueta never got the chance. He was shot and killed in June, becoming the first Mission police officer to die in the line of duty in over 40 years.

On Saturday, officers from across south Texas took his place. The Mission Police Department, Hidalgo County Sheriff’s Office and US Customs and Border Protection were among a “sea of law enforcement” who went to Cathey Middle School in McAllen to watch Espericueta’s son, Joaquin, play in his first 7th grade football game, where he was named an honorary captain, Q13Fox reported.

“We made a promise to the family that we’re gonna be there for special events,” Lara said. “Being the first football game, we gathered agencies from across the valley to let him know that we’re still there, even though his dad’s not.”

The turnout at Joaquin’s football game was the latest show of community support for the family in the past few months. Dozens of officers helped welcome Joaquin to his first day of school, and others helped his daughter move to San Antonio for her education.

Espericueta, who was featured on the A&E show “Live PD,” was killed in June while responding to a call for help from a woman who said her son had shot at her car.

When Espericueta attempted to make contact with her son, the man began to run, and then turned around and shot Espericueta, police said. 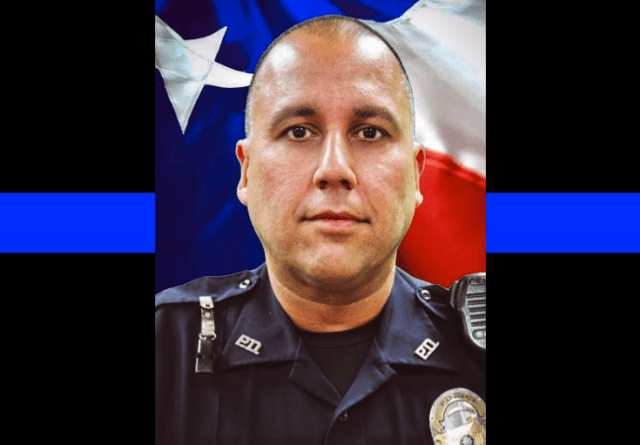 Lara, who organized Saturday’s gathering for Joaquin’s football game, said, “Nobody hesitated on showing up.”

“Everybody was willing to go ahead and come out,” he said. “Just to support him, just to let him know that we’re going to be there for the rest of his life.”

Before the game, Joaquin and several officers went to midfield for the ceremonial coin flip, and a helicopter flew overhead in Espericueta’s honor, Lara said. Joaquin, the team’s center, played well in a big win, Lara said.

“He was really excited. He was real thankful about us being here for him,” Lara said. “He has a huge heart. He’s going to be a good young man.”