They said the call Thursday led to the arrest of Michelle Louise Kolts on bomb-making charges.

“I can only imagine how hard it is to call in about any family member,” Sheriff Chad Chronister said, according to Bloomingdale Patch.

During a search of the house in Wimauma, investigators also seized pistol powder, knives, hatchets, nunchucks, BB pellet rifles and handguns and books and DVDs on murder, mass killing, bomb-making and domestic terrorism, Fox 13 Tampa reported. It was unknown if the firearms were booked for safekeeping due to the circumstances, or if they’ll be connected to additional charges.

Chronister said Kolts admitted to making the pipe bombs and planned to use them to hurt people without being specific, according to the station.

“We’re not aware of any type of hit list,” he said. “Her statements are very generic.” 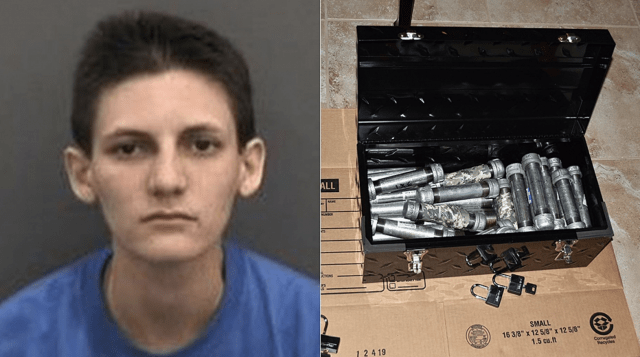 “What is even more frightening is that each of the pipe bombs contained nails, metallic pellets or a combination of both, and it would have taken less than 60 seconds per device to add the powder and fuse material she already possessed to detonate each device,” Chronister said.

He said the bombs had the potential to kill hundreds and possibly thousands of people.

Deputies spoke to Kolts a year ago over an online order of bomb-making manuals and anarchy manifestos, Fox 13 reported.

“She became consumed with the Columbine and Oklahoma killings,” the sheriff said, according to the station. “At that time, she wasn’t diagnosed with any type of mental health diagnosis. She stated, at that time, her intentions were not to harm anyone. Her parents said she was a little on the autism spectrum.”

But it was not clear at the time of publication if that had relevance to the latest charges.