SALVATIERRA, Mexico – A group of heavily armed Mexican “hitmen” are seen in newly released footage storming a hospital and dragging away a patient who was later discovered dismembered, a dramatic display that’s only the most recent example of the brazen cartel-fueled killings plaguing the country.

The incident happened Nov. 21 at the General Hospital of Salvatierra, located about 160 miles northwest of Mexico City, Fox News reported.

In video footage obtained by Mexican news agency Aristegui Noticias, more than a half-dozen armed men can be seen entering a wing of the hospital and searching rooms while a member of the crew holds a security guard at gunpoint.

The gunmen — described by the news outlet as “hitmen” — are seen bringing the security guard to several rooms in search of a particular injured person. When the men eventually find their target, they remove him from the hospital on a gurney. 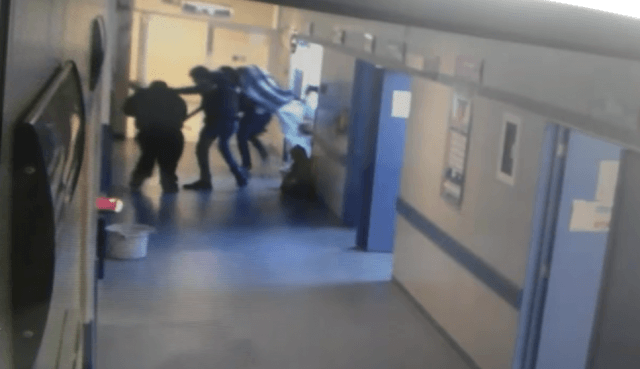 The kidnappers upon storming the medical center reportedly removed cell phones from hospital staff to prevent them from contacting police until after they’d left the building.

The unidentified patient who was kidnapped from the hospital was discovered hours later dismembered in a nearby town, El Sol del Bajio reported. The body of the man was discovered on white sheets and a blanket, with a message written on cardboard, according to Aristegui Noticias.

It’s not yet known who the gunmen were or why they targeted the patient. However, armed men stormed two other hospitals last month in Juventino Rosas and Apaseo el Grande, where they kidnapped and killed male patients who had been admitted with gunshot wounds.

The dramatic video emerged as Mexican security forces on Sunday killed seven more members of a presumed cartel assault force that staged an hour-long attack over the weekend in a town near the Texas border.

The Coahuila state government said in a statement that lawmen aided by helicopters were still chasing remnants of the force that arrived in a convoy of pickup trucks and attacked the city hall of Villa Union on Saturday. The armed group of suspected cartel members stormed the town of 3,000 residents in a convoy of trucks, attacking local government offices and prompting state and federal forces to intervene. Ten alleged members of the Cartel of the Northeast were initially killed in the response.

Gov. Miguel Angel Riquelme said late Sunday afternoon that authorities had determined the casualty count from the gunbattles stood at 14 gunmen dead and four police officers killed. He said two civilians also were slain by gunmen after being abducted.

The reason for the military-style attack on Saturday remained unclear. Cartels have been competing for control of smuggling routes in northern Mexico, but there was no immediate evidence that a rival cartel had been targeted in Villa Union.

In early November, Mexico made international headlines when a drug cartel ambush killed nine Americans, focusing world attention on rising violence in the country. In October, a massive operation by the Sinaloa cartel prompted the federal government to release the captured son of drug lord El Chapo and pull back the army, which found itself outmaneuvered on the streets of Culiacan.

Mexico’s murder rate has increased to historically high levels, inching up by 2 percent in the first 10 months of the presidency of Andrés Manuel López Obrador. Federal officials said recently that there have been 29,414 homicides so far in 2019 – up from 28,869 over the same period last year.

The release of the figures comes at a time when López Obrador is facing growing criticism for his government’s “hugs, not bullets” policy of not using violence when fighting violent drug cartels.