Sgt. Kelvin Ansari gave his son wise advice just before he was gunned down

Sgt. Kelvin Ansari was a hero to his children. They are hard-pressed to remember a time when their father was not in uniform.

During his 21 years with the U.S. Army, Ansari served tours in Kuwait, Iraq and Saudi Arabia.

As a result of his dedication to public service, he was inspired to become a police officer in 2008. Subsequently, the 50-year-old Georgia native rose to the position of sergeant last year.

“He was in uniform – with the Army, then the police department – all my life,” said his son, Kelvin Ansari, Jr. “We were comfortable with it. He fought in different wars, we saw him as Superman. His whole tenure, I don’t remember any close calls. We were used to him always returning.”

On May 10, Kelvin, who is 26 and lives in New York, spoke with his father on the telephone, FOX News reported.

“Remember, your reputation precedes you.”

The elder Ansari, in his characteristic philosophical way, dispensed some pearls of wisdom to his son, including, “Remember, your reputation precedes you.”

“My dad was just approaching the car and this guy just hopped out of the car and shot my dad,” Kelvin Jr. said, still trying to understand what will never make sense.

He is left with special memories. And regrets.

He remembers his father, who loved to tinker with electronics, helped him build his first computer.

“He was always trying to fix or build something,” said Kelvin, an artist. “He was very hands-on. If he didn’t know how something worked, he just had to figure it out.”

He recalls how his father, who loved to reflect, always had a special space wherever they lived where he retreated for some quiet time. And there was the Boyz II Men Barber Shop in Savannah where his father took him and his brother to get their hair cut when he returned from an Army tour in Germany.

And then there are the regrets — things left unsaid and undone on the belief that there was always tomorrow.

“I wish I had reached out to him more,” his son said, “that I had made more of an effort. I have found out that he also wanted to start reaching out to me more. I was busy, he was busy. I was the child who had left the South and moved away. I think of all the things I never got a chance to do with him, like travel, have a real vacation with my dad. He loved to travel. That’s why my last conversation with him hurts so much.”

He added: “We played phone tag for a long time before we finally got to have that last conversation, and the words he said to me, ‘Remember, your reputation precedes you,’ permeate through me.” 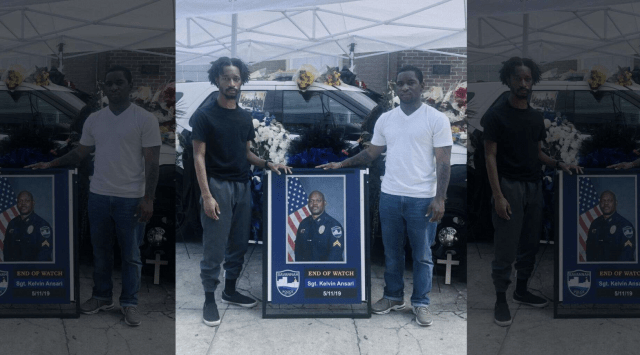 When he reached Savannah after his father died, Kelvin Jr. realized the impact Ansari had on the community.

Memorials to his father are everywhere in Savannah, including near the Boyz II Men Barber Shop, which is where his father lost his life.

Fittingly, his elementary school art teacher had her class work on a portrait of Sergeant Ansari. Moreover, local artists created paintings and drawings in his honor.

A little boy ran a mile carrying a Blue Lives Matter flag in Ansari’s honor and recorded a video message praising his service to the country and the community.

“The Savannah Police Department and Savannah in general have been so supportive,” his son said. “I’ve gotten social media messages – in the thousands – from people I’ve never met. I’m so thankful that he is remembered like that.”