Jason Dusterhoft was fired in 2018 after a woman he was dating accused him of assault during instances of “sex strangulation.” Dusterhoft has maintained the sex was consensual. Moreover, the Travis County prosecutors declined to charge him with a crime.

However, the arbitrator ruled that Dusterhoft should continue to be indefinitely suspended from the department for being dishonest with the agency as well as destroying evidence on his phone during the investigation, the Statesman reported.

While the D.A.’s office declined prosecution on Nov. 16, 2018, Austin Police Chief Brian Manley still handed down an indefinite suspension Dec. 20, 2018 to Dusterhoft on the grounds of strangulation, statements regarding the strangulation-based allegations, acts regarding the search of his cell phone and associating with people who bring discredit to the department, hearing officer Norman Bennett wrote in his decision. Dusterhoft appealed that termination Sept. 24, 2019.

Bennett’s decision on the appeal states that, at the time, the strangulation and other slapping and physical contact were consensual, but the woman then made the complaints after their relationship ended in August, reported KXAN.

The decision says Dusterhoft was at a strip club Aug. 24, 2018 in Austin with the woman and others, one of whom was linked to drug use. A conflict between the woman and Dusterhoft began after she said he was “paying more attention” to another woman who was there. Two days later, Dusterhoft told the woman he was ending their relationship, and that night was when the complaints were made to members of APD. 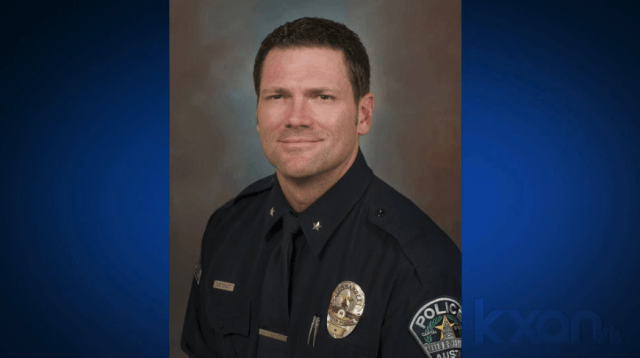 Bennett denied Dusterhoft’s appeal to get his job back, deciding he interfered with Internal Affairs investigators by deleting dating and texting apps, along with sexually-explicit video showing the alleged strangulation and assault, on his cell phone.

Dusterhoft also failed to hand over his cell phone — with the evidence on it — in a timely manner to investigators executing a search warrant, the decision stated. He left it at his ex-wife’s house on his attorney’s recommendation before a meeting with investigators, and he knew investigators wanted to look at the phone, the decision said.

He deleted the videos on the phone before handing it over to investigators because he “wanted to delete any personal information that would be embarrassing.” He said he didn’t delete anything work-related and claimed he thought the investigation was about overtime sheets and sick time usage. It took a direct order from an assistant chief for Dusterhoft to produce the phone, the decision said.

Dusterhoft later showed two videos of his sexual encounters to investigators, and said those were just some of the “many items” he deleted from the phone after the search warrant was issued and before he spoke to his attorney, the decision said.

“Clearly these videos were relevant to the pending investigation and should not have been deleted,” Bennett wrote.

Bennett ended the decision saying, “the evidence convinces that the Appellant (Dusterhoft) engaged in serious misconduct in this case.”

“It further establishes that such conduct, standing alone, supports the discipline of indefinite suspension. Therefore, the appeal is denied,” Bennett wrote.