MINNEAPOLIS – The Minneapolis police union is touting its support for President Donald Trump in the wake of a new city policy that blocks officers from appearing in uniform with the president during a campaign rally this week.

Trump is scheduled to speak at Target Center in Minneapolis on Thursday. Ahead of the rally, the city told its police department that officers could not wear their uniform while showing support for candidates at political events or in political ads, reported Star Tribune.

Police union president Bob Kroll unveiled the new T-shirt on his Facebook page over the weekend and said they are available for sale at the union’s northeast Minneapolis headquarters today. However, we tried to access Kroll’s page and discovered a message, which read, “Sorry, this content isn’t available right now.” Isn’t that mysterious? No doubt, Facebook will call it a glitch or something. Fortunately, the screenshot is making its way around various articles on the topic. See below: 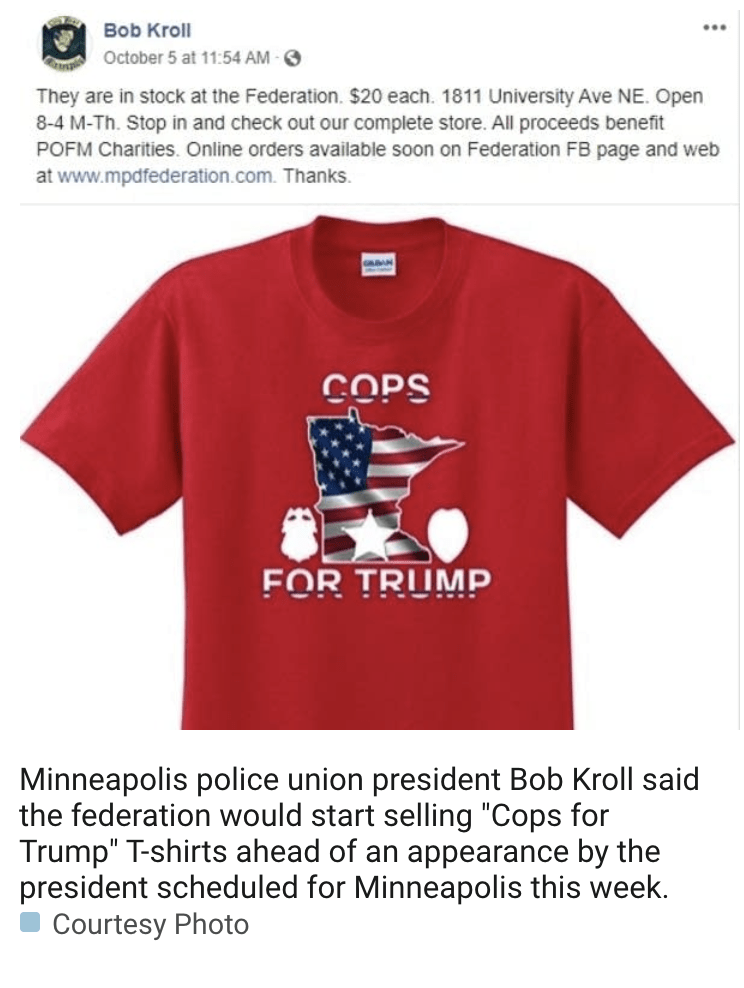 Kroll said the shirts will also available for online orders at the Police Officers Federation of Minneapolis website.

The red shirts read, “Cops for Trump” and feature an American flag shaped like the state of Minnesota. The design also includes an outline of three common badge shapes, including that of the Minneapolis Police Department.

The shirt sale follows a back-and-forth between the union, Mayor Jacob Frey and the city’s police chief late last month. Federation leaders said they were told that a review of the police department’s uniform policy had resulted in a decision to ban officers from overt political activities.

In August of 2018, some officers appeared in a campaign literature photo with former Gov. Tim Pawlenty, who was seeking the Republican endorsement for Governor. Police also said they had been ordered to appear in the past with Democratic presidents Bill Clinton and Barack Obama.

Minneapolis police officers are appearing in a @TimPawlenty ad targeting immigration. Seems to be mixed message from the city's sanctuary pledge pic.twitter.com/CiC4DCadq4

“I received several concerns from stakeholders regarding the perception of political bias and favor of the MPD when some of our employees endorsed political candidates while wearing the MPD uniform,” Arradondo said in a recent statement.

“The new policy prohibits MPD employees from wearing the MPD uniform while endorsing political candidates. Trust is the cornerstone of our service and I believe this policy helps to strengthen that.”

So, they’ll be wearing “Cops for Trump” t-shirts instead.