NEW YORK – The family of one of the five victims in the Hanukkah stabbing rampage at a New York home last weekend revealed heartbreaking news about the severity of his injuries, from which he may never recover, as a judge who set the suspect free last year is clamming up about why he let him go.

The family of Josef Neumann said in a statement Tuesday night the 70-year-old was stabbed multiple times during the attack, sustaining injuries that included three cuts to the head, one cut to the neck, a shattered right arm, and a knife that “penetrated his skull directly into the brain.”

“Doctors are not optimistic about his chances to regain consciousness, and if our father does miraculously recover partially, doctors expect that he will have permanent damage to the brain; leaving him partially paralyzed and speech impaired for the rest of his life,” the family said in a statement.

The suspected attacker, 37-year-old Grafton Thomas, was held without bail on Monday after appearing in federal court in White Plains on five counts of obstructing the free exercise of religious beliefs by attempting to kill with a dangerous weapon.

On Wednesday morning, the Orthodox Jewish Public Affairs Council in Hudson Valley shared a photo on Twitter of Neumann’s devastating injuries. The image shows the 70-year-old with a respirator, with a heavily sutured and bloodied head.

This is the visual state of Josef Neumann who has been stabbed at the Hanukkah celebration Saturday night in the Forshay area of #Monsey. (Press/media is authorized to publish/post this.) #MeJew pic.twitter.com/1e1acNG2O9

“Our father’s status is so dire that no surgery has yet been performed on the right arm,” according to the statement released by the family. “Doctors are not optimistic about his chances to regain consciousness, and if our father does miraculously recover partially, doctors expect that he will have permanent damage to the brain; leaving him partially paralyzed and speech impaired for the rest of his life.”

STATEMENT BY THE FAMILY OF JOSEF NEUMANN with details about their beloved father following the #Monsey stabbing attack, and with a call to Jews around the world to share their experiences with anti-Semitism and adding the tag #MeJew.https://t.co/7B5p5qfNE4 pic.twitter.com/nr4y3lTLwO

The stabbings on the seventh night of Hanukkah came amid a series of violent attacks targeting Jews in the New York area that have led to increased security, particularly around religious gatherings.

A criminal complaint against Thomas said journals recovered from his home in Greenwood Lake included comments questioning “why ppl mourned for anti-Semitism when there is Semitic genocide” and a page with drawings of a Star of David and a swastika. A phone recovered from his car included repeated internet searches for “Why did Hitler hate the Jews” as well as “German Jewish Temples near me” and “Prominent companies founded by Jews in America,” the complaint said.

Thomas had multiple run-ins with law enforcement before he was taken into custody over the weekend, including an arrest for assaulting a police horse, according to an official briefed on the investigation who was not authorized to discuss the matter publicly and spoke to the Associated Press on condition of anonymity.

The judge who presided over a case last year when Thomas was arrested for menacing a police officer refused to comment to the New York Post. “It’s a sealed case and I can’t comment on it,” Greenwood Lake Justice Keith Garley, a retired NYPD cop, said Tuesday.

The case resulted in an adjournment in contemplation of dismissal, according to the Post.

“That decision was made by the District Attorney’s Office,” he told the paper outside his home. The Orange County DA’s Office told the Post it would also not comment on the judge’s remarks, citing the “the sealed aspect” of the case.

The stabbing suspect’s court-appointed attorney, Susanne Brody, said Thomas has struggled with bipolar disorder and schizophrenia. Another attorney retained by his family, Michael Sussman, said Thomas had been hearing voices and may have stopped taking psychiatric medications recently.

Sussman told reporters he visited Thomas’ home and found stacks of notes he described as “the ramblings of a disturbed individual” but nothing to point to an “anti-Semitic motive” or suggest Thomas intentionally targeted the rabbi’s home.

“My impression from speaking with him is that he needs serious psychiatric evaluation,” Sussman said. “His explanations were not terribly coherent.”

Thomas’ family said he was raised to embrace tolerance but has a long history of mental illness, including multiple hospitalizations.

“He has no history of like violent acts and no convictions for any crime,” his family said in a statement. “He has no known history of anti-Semitism and was raised in a home which embraced and respected all religions and races. He is not a member of any hate groups.”

Thomas’ family said his mental health deteriorated over the years. He would hear voices and have trouble completing sentences at times. Thomas said a voice talked to him about the property that was in the rabbi’s house, according to Sussman.

The U.S. Marine Corps said Tuesday that Thomas began boot camp but was separated from the service a month later for “fraudulent enlistment.”

A Marine Corps spokeswoman would not provide any further details on why Thomas left the Marines as a recruit in late 2002.

“Those specifics are administrative in nature and therefore information we are required to keep private,” Capt. Karoline Foote told the AP. 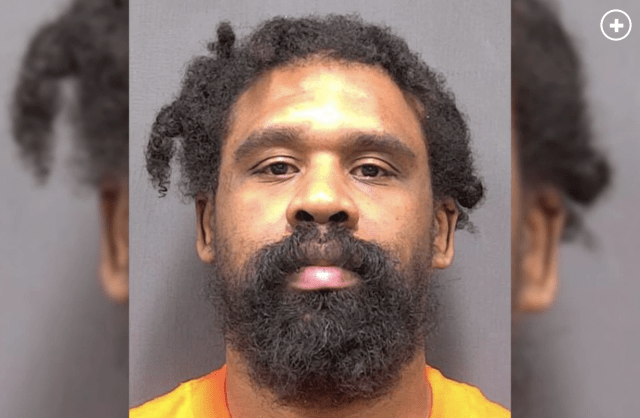 Grafton was once accused of squatting in a Salt Lake City house where the owners suspected him of “drug activity” and “theft,” court records show, according to the New York Post.

Grafton Thomas was sued in January 2014 for allegedly ignoring an eviction notice for illegally occupying a house at 351 North 600 West in the Utah capital, records show.

The eviction notice from sibling landlords Shannon Feldman and Dennis Graham alleged that Thomas “committed or permitted a nuisance” in part because “no lease was ever executed.”