CLEARWATER, Fla. – A Florida mother is accused of murdering her infant son after collecting thousands of dollars via GoFundMe. The woman has confessed to the scheme, according to law enforcement authorities.

Victoria Grace Jackson, 24, originally told investigators that she awoke May 24 to find her 10-month-old son, Malachi, “unresponsive” in his crib, the Clearwater Police Department said in a Facebook post on Nov. 1.

She called 911, and the toddler was rushed to a local hospital, where he was pronounced dead, the Tampa Bay Times reported.

Jackson launched the GoFundMe campaign just days after the death of Malachi, Gray News reported. Her goal was to collect $5,000 to help pay for the cost of his funeral.

“I want to give my son the best memorial service I can,” the fundraising page read. “We don’t know what the cause is yet, I woke up and he wasn’t breathing and had bloody foam coming from his nose. I’ve never been so heart broken in my life. Please help me take care of my baby one last time.”

Police did not initially find any evidence to contradict Jackson’s account of what occurred, but continued to investigate the little boy’s death in the months that followed, Clearwater Police Department (CPD) spokesperson Rob Shaw told the press.

In the meantime, more than 100 people donated a total of $4,393 to the cause, Gray News reported.

But on Oct. 30, things changed. One of Jackson’s friends reached out to police and told them that Jackson confessed she had smothered Malachi to death with a pillow.

The “grieving” mother incriminated herself during a phone call recorded by detectives. Moreover, Jackson later confessed to police that she murdered her baby boy as he was sleeping, the Tampa Bay Times reported. 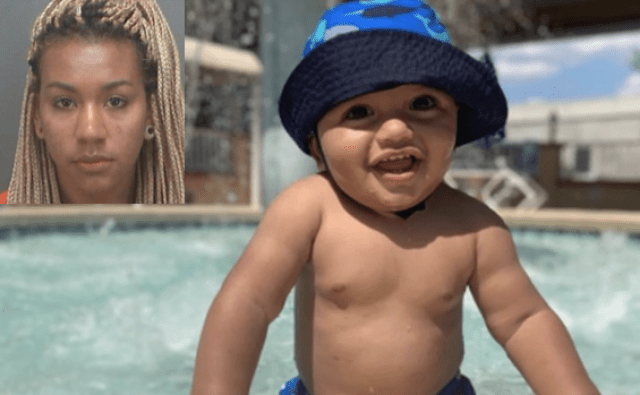 Victoria Grace Jackson, 24, originally told investigators that she awoke May 24 to find her 10-month-old son, Malachi, “unresponsive” in his crib. She later confessed to smothering him after collecting $4,393 via GoFundMe. (Clearwater Police Department/GoFundMe)

Investigators noted that Jackson made suicidal statements after the confession, and that she was potentially suffering from mental health issues.

Jackson was booked into the Pinellas County Jail, and has been charged with first-degree murder, according to the Clearwater Police Department.

The GoFundMe page was removed on Nov. 2, People reported.

The company has already begun issuing refunds to the donors who contributed to Jackson’s fundraising campaign, according to Gray News.

Marah Gonzales said that she went to high school with Jackson, and that she was one of the donors who contributed to the fund, WTXL reported.

“Tragedy is a time where you need to be the most compassionate and loving and kind and she totally just took advantage of that,” Gonzales told the news outlet. “No one knew the real story of what happened other than her and whatever friend that she told.”

“It was just kind of so manipulative to the point she was consistently reaching out and consistently like please donate to this,” she added.

“It’s important to know that the platform is backed by the GoFundMe Guarantee, which means all donors are fully protected by a refund policy,” the company said, according to WTXL.